New version of Exchange, SharePoint and Skype for Business 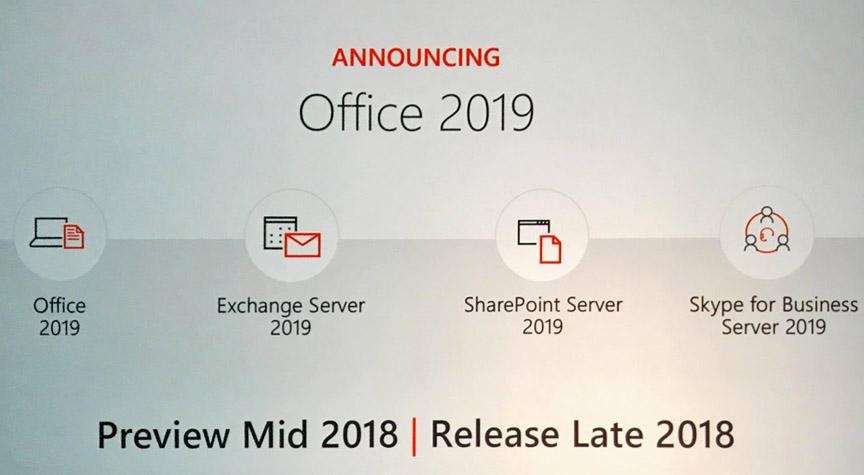 But it is not just Office. Microsoft is increasing the price of perpetual licenses for its big enterprise servers by 10 percent too, including Windows Server 2019 Standard Edition, Exchange, SharePoint Server and Project Server.

In addition to this,CALs (client access licenses) required for personal computers to connect to, and access information on, Microsoft's server software, will jump by 10 percent too while RDS per Device CAL (Remote Desktop Service) will climb 30 percent.

There is no real secret as to why Microsoft is doing this. If, over the past couple of years, we have seen Microsoft stress the importance of the cloud in its business model and how it would prefer if people moved to the cloud, this is the first time that it has really used the price-argument.

The term perpetual license refers to a software license that is paid for with a single, up-front fee, which in return gives the buyer the right to use that software in perpetuity. The price of perpetual licenses of Office have remained the same since the release of Office 2010. Microsoft now says it wants to create “consistency” and “transparency” across all its channels and to highlight the commercial sense of moving to the cloud. On its partner

"On October 1, 2018, we will adjust pricing for our licensing programs and make price adjustments to on-premises and cloud products. These changes will highlight the benefits of our pricing for a cloud-first world, help us move from program-centric to a customer-centric pricing structure, and create more consistency and transparency across our purchasing channels... The intent of modern pricing is to clean up how we manage pricing and discounting to align to how Microsoft and partners sell cloud services. The pricing today is inconsistent, causing friction, and acting as a barrier to closing deals."

There is no mention anywhere of changes to the price of Office 365, or any of the other cloud suites like Microsoft 365. From this, it seems clear that Microsoft is not looking at the perpetual licenses as a long-term option, even if it is due to release new versions of Office 2019 for both Windows and macOS, and Exchange 2019 on October 1. Microsoft 365 Live Events Goes Public Sticking with Microsoft and Microsoft 365, the company has announced the public preview of "Live Events" that will make connection and engagement across the digital workplace easier, quicker and more effective. According to Lori Wright, general manager for Microsoft 365 Collaboration the new intelligent event capabilities were released to add live and on-demand events for teams and across the organization.